Why Socialism Cannot Work Is NOT About Economics 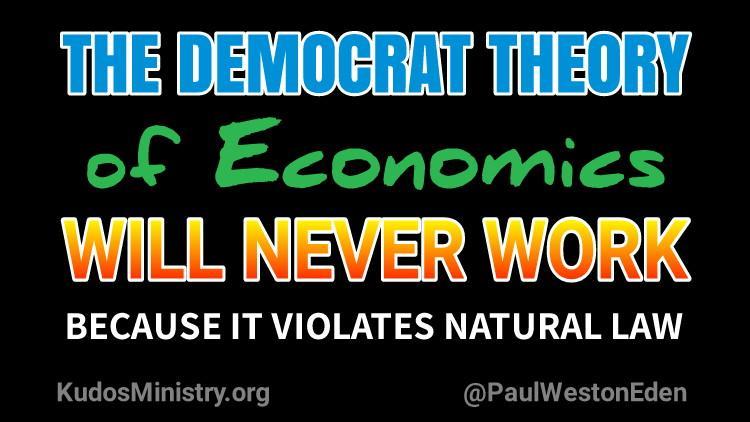 Economics, economic theory, and monetary systems are spokes on the wheel of social and religious thoughts and beliefs. Socialism, Communism, and Capitalism are all based on forms of religious ideals and incentives.

MMT (Modern Monetary Theory – a form of socialism) that Democrats/Progressives are pushing is an economic theory derived from the social/religious thought of government as provider and controlling money rather than the individual being responsible and controlling his own money. They believe in government as the Father & Mother of society—that people cannot work, think, or behave in ways that are profitable and healthy for themselves or their families. Looking at our current regressive culture an argument can be made that many people don’t make good choices. Why is this?

It is because of the instinctive human behavior of incentive. As people realize they can work less and vote themselves more benefits from government, government expands and incentivizes people toward even more government. Human behavior defaults to the path of least resistance. Eventually the human behavior of habit takes hold and you have a system of never-ending entitlements. Entitlements lead to slothfulness, apathy, poor self-esteem, and loss of creativity—all doing harm to a society.

When people are taught to believe the human being is part of a “collective” and their money must be “governed” by more enlightened human beings, then theories like MMT (socialism) seem like a good choice. It seems compassionate – and for sure sounds “divine” that endless ones and zeros in massive computer systems can make us all well-off and rich in culture and soul. But instead it teaches that there are few, if any, limitations to what can be provided by divine government. It breeds a mindset that is not good for the soul, much less mankind.

The free enterprise system is based in religious thought and the natural laws of human behavior that incentivizing work, productivity, and personal responsibility are good for the body, mind and soul. It provides self-esteem through accomplishment. It provides dignity. I’m more concerned about the condition of a man’s soul and how economic systems are devised around human nature. Human nature trumps economic theory if you want a healthy culture.

When man figures out, as we have, that we can just vote ourselves financial resources from divine government (using our fellow man) we go down the path of the “collective” owes me, but sadly misunderstanding “me” is part of the collective as well. MMT is macro-economic theory not micro-economic theory. Any system that encourages our provisions are simply taken by legal authority from others, rather than working to provide for yourself, feeds the base human instinct of “something for nothing” – and all humans are susceptible.

Another side effect of collective systems which is rarely discussed is that redistribution schemes are harmful to our human need of love and dignity to help and serve one another. People are taught that government is in charge of helping my neighbor. When a person in need gets money, food, clothing etc., from a debit card provided by government they receive material items but not love. When a person receives needs directly from others the receiver and the giver experience love and joy. This enhances culture and teaches us that giving is divine. It teaches that working is not just about me, it is about having something to give someone else. Any form of macro-economic system that emphasizes government being the distribution center of resources cripples the human need of kindness and the joy of helping one another.

The USA is not operating in true free enterprise capitalism and hasn’t for over 100 years. It stands to reason why the masses are disenchanted and looking for new “systems” to take over. The system is broken because politicians learn very quickly the default human behavior of something for nothing and they incentivize their constituents with government handouts. Man will go the easy route of financial well-being if it’s continually offered, especially when he realizes his neighbor is doing it. Then together they will continue increasing the size of government in order to get more free stuff. Free stuff equals more votes for politicians. The politicians are brokers. They make a lot of money being the middle-man between you and I. Politicians are controllers, authoritarians.  Their natural instinct is to make more laws to broker more entitlements to get more votes.

You never see the leaders of socialist movements or socialist countries choosing socialism for themselves. They ALWAYS choose capitalism in their personal life. They control the levers of cash flow and the laws, and they benefit from being the brokers and deal-makers of capitalistic opportunities. The NEVER allow themselves to be under the same socialistic system of those they are over.

Authentically free enterprise requires very small government. It puts the power of individuals over the power of collectives and power brokers. People are productive, creative, and fulfilled. Where there is need for inventions they get filled quickly. When ideas don’t work they fail quickly wasting less capital. When people need help, they receive help face to face, man to man. The receiver is dignified as a person who just needs a helping hand. The giver receives the joy of helping his fellow man. Sooner or later the one receiving help will help another out of gratitude. These acts of kindness, love, dignity, work ethic, and productivity cannot succeed in a socialist system because socialism is based in religious idealism of political power brokers not individuals. It is opposed to the dignity and value of the human soul.

One way or the other human beings will behave on incentives. The question is what incentives shall we promote for America?

Follow us
Post Views: 1
Kudos! Ministry, SSM is a non-profit Christian discipleship training ministry to equip and exhort Christians to be powerful, effective disciples of Christ.