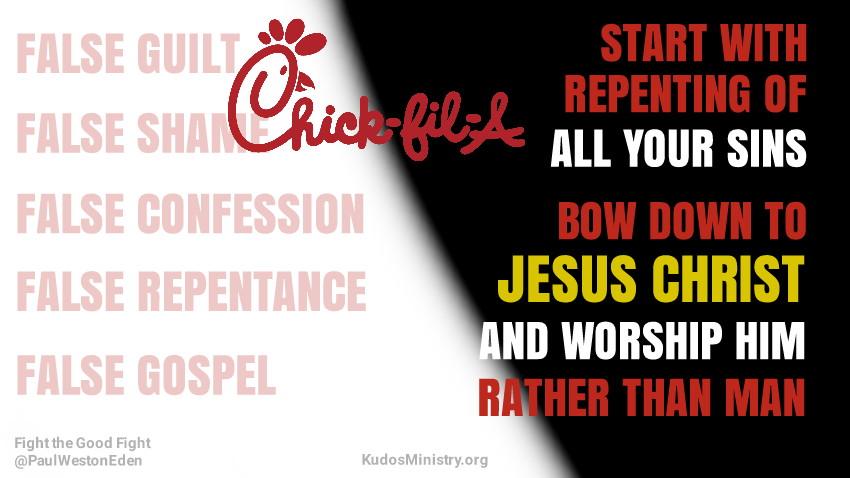 I understand what Dan Cathy thinks he’s doing, but he misused both “repentance” and “conviction” all the while saying another man probably didn’t understand the word ‘repentance’. He’s now making a movement of telling all White people they are racists and we should repent because obviously we are being convicted by the Holy Spirit. After all, we’re White! What happened in another church spontaneously may well have been genuine, but Cathy is now publicly damaging the Gospel, in a church, where millions of people are hearing false teaching. If a church leadership team cannot even understand the most basic tenants of the Christian faith as confession and repentance it is not a Bible teaching church. What are the leaders in this church believing and teaching? If Cathy is being convicted of his sin of racism he needs to confess it and repent by going to the people he sinned against. If he is behaving as racist to all the Black community he should use this public time to say so with a genuine apology, instead intimating that all Whites are inherently racist too and should go around with a shoe brush shining shoes. I can see it now – churches having shoe brushes hanging in their buildings for use by Whites during communion. Or bumper stickers with a shoe brush, ‘Stop me if you’re Black! I’ll shine your shoes because I’m a racist!”

Cathy and so many others who have a public audience are severely damaging race relations with their public pronouncements trying to be the Holy Spirit for everyone else. Jesus knelt down and washed the feet of the disciples to demonstrate servanthood. He wasn’t guilty of anything. Don’t use this teaching of our Lord unbiblically. I’ve been part of feet washing moments. I’m not ashamed to wash feet. But it’s not because someone is decrying a new fad with a gimmick. And it’s not because I’m White. I don’t want Black people to experience fake guilt and fake repentance and be damaging the message of the Cross that I want to spread. If anyone who reads this is behaving with racism in their heart, repent and go to those you know you’ve hurt. Speak it publicly in your church and give a genuine testimony. But don’t buy into these Christian fads that do more damage than help.