Government Authority and Citizen Submission | Who has the Higher Responsibility? 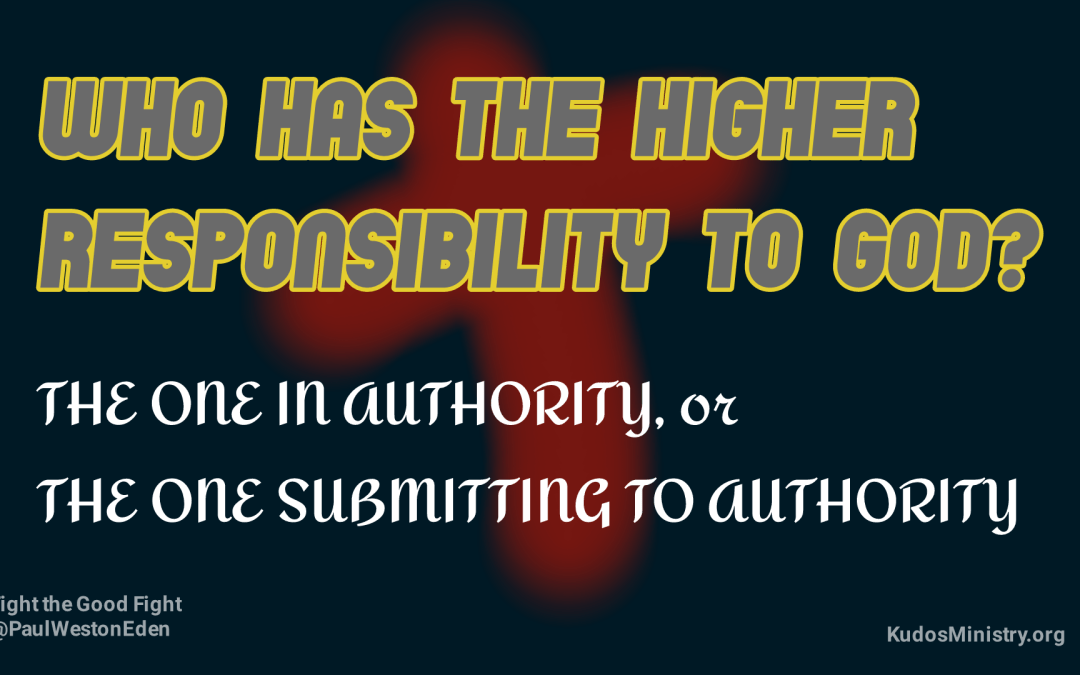 The principle of people submitting to the government is not the only point of biblical submission. In fact, the deeper, more profound principle is the responsibility of those in authority. God created a Divine Order in how He commanded mankind to function to sustain peace, prosperity and righteousness. Those in authority (governments, husbands, fathers, employers, pastors/preachers, leaders, etc.), have a higher standard to meet before God, and God will hold all in authority accountable. We only need to look at one example, Jesus, to see this principle in perfection.

Jesus is God in the flesh. He is the ruling authority over mankind and all governments. Yet He submitted Himself to God the Father for our benefit, for our sins not His, even to death on a cross so that we might be saved from spiritual death. He came to serve not be served. This is leadership. This is love. This is the principle of submission those in authority are to model. God’s Divine Order is designed for those in authority to be servant leaders with sacrificial love. Those in submission to authority are commanded to honor and respect their leadership because they are ordained by God to lead with humility and to serve and protect on their behalf. This principle is where “to serve and protect”, that at one time was on police cars, originated. It’s from God. Jesus’ harshest rebukes were to those in authority. Being authoritarian, ruling without humble reverence to God, is not moral, much less biblical, authority.

America was founded on the belief that the world was made by a Creator who graced mankind with inalienable rights. This is what made America great. Governments do not give rights. Governments have a God-ordained duty to be ministers of God for the good of the people by protecting inalienable rights and to avenge evil and evildoers who infringe on these rights, and to be servants of God. This is clear in Romans 13, a section of the Bible often quoted about submission to government, but rarely used as a reference for governing authorities’ duties. 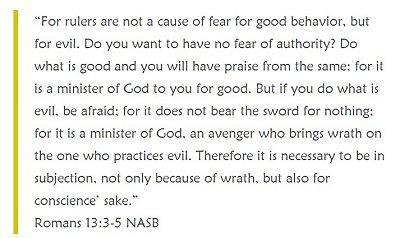 Nowhere in the Bible does God command us to submit to government under every circumstance, especially when it goes against God’s law. Many servants of God in the Bible were stoned, beaten and killed because they obeyed God rather than man. If unconditional submission were the point, then an abused and battered wife would be compelled to stay in her situation and permit her husband to continue beating her. The husband must be stopped! He is out of order. This, in fact, is the picture of today’s American government. The government is out of order. It is a good and righteous thing to stand against tyrannical government who are abusing their authority. It is provided for in our founding documents as a nation. God will ultimately hold them accountable spiritually, but it is the duty of righteous men not to simply look on as others are abused, but to exhort government to righteousness or otherwise hold them to account for the sake of their fellow citizens.

Follow us
Post Views: 2
Kudos! Ministry, SSM is a non-profit Christian discipleship training ministry to equip and exhort Christians to be powerful, effective disciples of Christ.