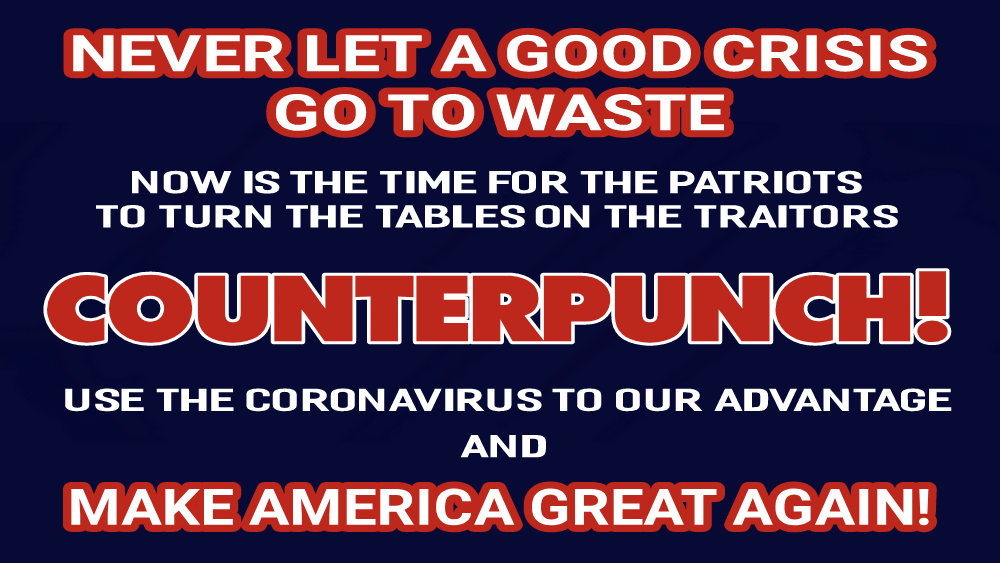 This is the liberal mantra to destroy America’s Constitution and Bill of Rights, and anything having to do with God, morality, virtue, and honor.

President Trump and the American patriots should turn the tables on the liberal agenda of using the Coronavirus to reign in socialism and their one-world-government. Instead of trying to save a bloated socialistic government and bring back the old economic system that has far too much socialism, we need to be aggressive and drain the swamp.  We should use this time where our nation is already shut down to massively reduce government and abolish many unconstitutional laws and programs. Most people would never be willing to endure the necessary pain of revamping the socialistic aspects of our system. It requires immense sacrifice. But now it is being forced upon us. All at once. The devastation to our economy will linger for a long time. Many businesses will not recover. Many jobs will be lost. Our economy is much too complex to believe the federal government can fix it with stimulus. You simply can’t fix debt with more debt. I applaud President Trump’s handling the crisis and his work on behalf of America since 2016. I believe he is positioned in this role, at this time, to be the leader of courage and conviction we need.

But while President Trump is doing an amazing job, The People must help him. He is sacrificing to do this thankless job and we must sacrifice as well to Make America Great Again. The looters and thieves who have been in government for decades continue to get paid massive salaries and benefits. And for what? They relentlessly tear down our Republic and try to take down our President with lies and treason. The swamp continues to operate and stink up the nation while The People suffer in the stench and economic anchors of their unconstitutional laws, corruption, social engineering, and cronyism.

WE MUST ACT. THIS IS THE TIME TO MAGA. We must re-elect President Trump and get a patriotic Republican House and Senate. Either this or a Convention of the States. We must let President Trump know WE ARE WILLING to do what is necessary. There will be pain, but we are going to have pain regardless. Let’s allow the pain to mean something for good. Let’s use it to our advantage and not the socialist NWO advantage. This is the time for The Patriots to counterpunch.

Things we should focus on getting done ASAP:

These are only a few items. There are many more that could be eliminated or drastically reduced. I’m not arguing that I know best HOW to do all of this, just that it needs to be done. Americans are being forced out of work. Businesses are being forced to close down. We are being mandated to lose our livelihoods while government continues on and on and on. Our current government is the REAL virus. It is a massive infection on America’s respiratory system. Is is pneumonia to a Republic—a suffocating choke-hold on liberty, commerce, and morality.

We will never Make America Great Again until we have a small and constitutional government. I say, goodbye!