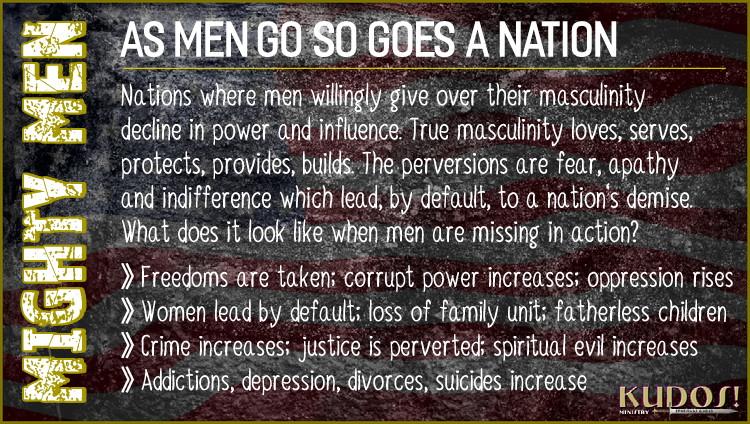 There are millions of men on social media platforms, in churches, in gun clubs and the like that say they believe in freedom and our Constitutional Republic.  There are many movements to stop the Constitutional violations from tyrannical governments, but the numbers of men that are visibly in action in the public square are far too few. I’ve been thinking a lot about the disciples of the first church and the founders of our nation—men who had conviction in their beliefs and were willing give everything for it. If it weren’t for men of action in the beginning, and so many since who gave the the ultimate sacrifice, our nation would not be enjoying the freedoms of a Constitutional Republic. If one is a Christian you know the sacrifice made by Jesus and the many sacrifices made by the disciples of the first church. Freedom isn’t free. Sacrifice is always the cost for freedom because there are always tyrants and self-centered movements that want power and control.

We are losing our nation. Fact is, we have already lost the Constitutionality of Government. It is only by the grace of God we have any freedoms. Our currency is unconstitutional, our Congress is unconstitutional, and the Bill of Rights is being violated every day. Millions upon millions of babies are being murdered in the womb—and this is the law of the land. Our taxes pay for many of these murders by funding Planned Parenthood. Corruption is rampant in government and in our culture, yet so many men are MIA. What will it take for men to wake up, let go of apathy, complacency and passivity and stand up for righteousness and goodness—put actions to what we say we believe? Faith without works is dead; freedom without action is dead. Sacrificing for something bigger than their ourselves is the way goodness carries on. It otherwise gets smothered by darkness. In a fallen world of sin, darkness is the default. Good men, men of conviction, resist and stand against evil and ungodliness.

It isn’t enough to be a “digital warrior” behind the computer or phone. It isn’t enough to sit at home and pray. It isn’t enough to cheer others on who are on the tip of the spear and taking the arrows. I call on men of God and men who say they believe in the Constitution and the Bill of Rights to choose this day to act. Get involved in person in the public square. Put action to your beliefs.